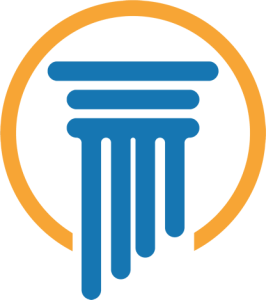 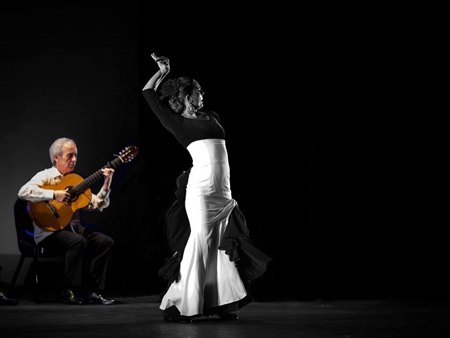 Visitors to Casa Uno can view our version of the Spanish Steps !

The staircase which runs from the indoor dining area feature a series of photo’s of significant Spanish people, places and events. Each photo is shot in black and white with only one significant part in full colour. The effect is very pleasing, and it is a project we are very proud of.  The trick is can you identify the subject of each photo ?

This page features just one of the photos currently on display. In this article we look at Paco Peña.

Paco Peña was born on 1 June 1942). He is regarded as one of the world’s leading traditional flamenco players.

He is also a local boy having been born in Córdoba. He started learning to play the guitar from his brother at age six and made his first professional appearance at twelve. He soon became highly regarded as an accompanist to flamenco dance and singing. However, at the start of the 1960s he made a major move in attempting to bring the heat and passion of flamenco to the wet and smoggy streets of London. This was a such a success that he soon became an idol for more conventional and modern rock guitarists and was invited to collaborate with many of them. Paco still has homes in London and Córdoba

Paco Peña established the Centro Flamenco Paco Peña in Córdoba and was the founder of the celebrated annual Córdoba Guitar Festival. This festival is an annual event taking place in July every year and features all kinds of music – not just flamenco. Over the years many world-famous artistes have played the festive such as Santana, B.B. King, Kiss, Sting and Chuck Berry to name a few.

Casa Uno is less than 30 minutes from Córdoba and is an ideal location at any time of the year to explore the magic of Córdoba and the whole of Andalucía. If you want to visit the birthplace of Paco Peña or visit his Córdoba Guitar Festival, why not book your stay at Casa Uno. 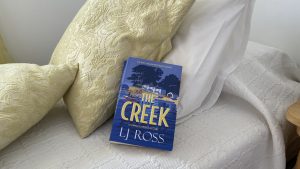 The Creek – LJ Ross If you are looking for a nice easy summer read then check out The Creek by LJ Ross on the Casa Uno Bookshelf. This book is undoubtedly a holiday book, 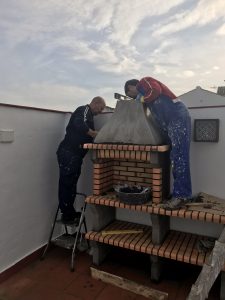 Our new Barbeque is nearly ready

There is nothing better than a proper Barbie when on holiday !!​ Here we can see Lolo and ‘dangerous’ Fran putting the finishing touches to the new barbeque which we hope will be an added 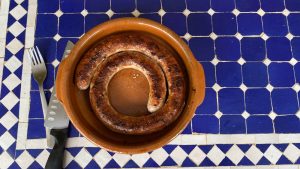 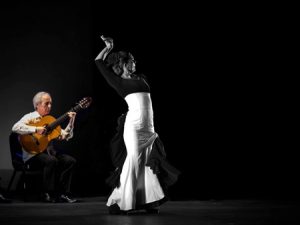